Bromsgrove of today, situated on the southern side of the West Midlands conurbation, with a population of almost 90000, a mix of rural and urban, is a far cry from that which appears in the Domesday Book of 1086.

Bromsgrove had a number of 'ancient' names, in the Doomsday Book the town was called Bremesgraue — Breme meaning famous person, graue meaning a fortified clearing in a forest - and covered an area of 30 hides.

An alternative, Brommsgraf, is ‘Old English’ meaning small wood frequented by highway robbers. Look in any Worcestershire history books and the common variations in addition to the above are Bromysgrove and Bremesgrefan.

In general terms the towns which got freedom first from the entanglement of the fuedal system were those on royal demesne - held directly by the king - followed by those who had grown up around a castle, a monastery or for some other reason such as the salt at Droitwich.

Bromsgrove heads the list of royal demesne lands in the Doomsday Book and remained with the Crown until the 16th century.

Although Bromsgrove was a 'borough' during the 12th and 13th centuries and represented in the Parliament of 1295 it was never granted a Charter.

Walter Gilbert was the managing director and driving force behind the Bromsgrove Guild, which was established in 1894 and was one of the most influential and successful craft guilds started in the late Victorian era.

In their early years they made jewellery, tapestries, gesso, metalwork and stained glass, but the Guild was only active in all these fields before the first World War.

One of the more famous works of the craftsmen are the gates and railings of Buckingham Palace , London which were commissioned in the early 1900’s.

After WW1 there were disagreements within the Guild and Walter Gilbert left, but continued to undertake special commissions on his own account.

In 1921 the Guild became a limited company known as Bromsgrove Guild ltd, with some members taking up directorships.

It seems that several members left the Guild at this time and continued their work independently, and commissions were passed to them by the Guild from time to time.

Blackwell Methodist Church has fine examples of the work of Bernard Sleigh an artist who worked at the Guild.

If you wish to own Guild work look on auction sites – pieces are available especially metalwork garden ornaments but be prepared to dig deep: two urns were recently advertised at £4,800 the pair. 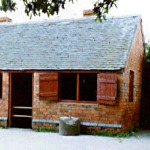 Bromsgrove’s rapid expansion in the 16th and 17th centuries was largely due to the craft of nail making introduced to the town by the French Huguenots; it developed to such an extent that Bromsgrove became the world centre for nail manufacturing.

During the 19th century nail making was one of the principal trades in and around the High Street Bromsgrove extending to Catshill, Lickey End, Sidemoor and Bournheath, where you can still eat and drink in The Nailers Arms.

There are nailers cottages on the left of Birmingham Road north of The Crabmill, at least one of these still has the forge at the rear although this has now been converted into accommodation.

Nail making equipment and a reconstructed nail shop that once stood in Melbourne Road (Sidemoor) can be seen at Avoncroft Buildings Museum .

Men, women and children were all employed in the nail making trade. Nailers usually rented their cottages and nail shops from a nail-master; it was normally the nail-master who supplied the bellows and forge whilst the nailer supplied and maintained his own bench and tools. Iron was supplied in 60lb lots and taken home with the order.

Once completed, the work was returned to the middlemen (known as foggers), these people were notorious for treating the nailers badly.

A favourite dirty trick was to tamper with the scales to reduce the amount of money owed and they gave little allowance for waste.

Life was very hard, Robert Sherard in an article ‘White Slaves of England’ in 1896 recounted asking a Bromsgrove woman about what amusement she had and was told “there is none for me; bed and work is all we get”.

Nail manufacturing survived many things but it was not able to combat mechanisation brought by the Industrial Revolution and by the late 19th, early 20th century had pretty much died out.

Have Some Great Information About The History of Bromsgrove?

Do you have some great information about this? Share it! and upload your pics too.

What Other Visitors Have Said

Click below to see contributions from other visitors to this page...

Bromsgrove, Tudor House AD 1572, New Road 1931
Was a former coaching inn called the Hop Pole and was built in 1572. It was demolished in 1840 to give better access to the new railway station, but all …

The Strand Bromsgrove 1965
Always a busy part of Bromsgrove it used to be called the Crescent. The Ivy covered building is Strand House a gentlemans residence built in 1701. In 1723 …

Northern Part of Bromsgrove Town Centre 1965
Photograph showing the Roebuck Inn at the top end of Bromsgrove town centre in 1965. The building in front was built for Wilsons and is now occupied by …

Coach And Horses Hotel in Bromsgrove 1949
Showing the front of the old Coach and Horses Hotel, with the Roebuck Inn beyond. There was also a parcel office and a busy Midland Red Bus Stop. Anyone …

Bromsgrove High Street 1960's
View of the southern end of the High Street, remember the branch of Currys that used to be in Bromsgrove and Stylewears the boys and mens outfitters. The …

Aerial View of Bromsgrove 1955
Focusing on the lower part of the High Street leading into Worcester Road. The Gardens were demolished when the Kidderminster By-pass was built.The George …


This Website Was Built With Sitesell - Sbi The Worlds Most Sophisticated Online Business Building System.